The charity’s operational helicopter carries a crew compiling pilot, doctor, and paramedic, 365 days of the year operating for twelve hours every day. They attend some of the most traumatic medical incidents across the province and are dedicated to delivering the very best possible pre- hospital care, both at the scene and whilst transferring the patient to the most appropriate hospital for their specific injuries.

What is not widely known is that AANI is a charity.  Each day costs in the region of £5,500 and £2m is needed each year to keep the air ambulance service operational.  They rely entirely on support from the public and local businesses.

We want to play our part in supporting this amazing charity and life-saving service.  etimes2 ltd will donate 2% of every sale of our Employee Engagement Platform between now and 31st December 2019 (at least).  Our reasons for doing this are very personal – see our story below. 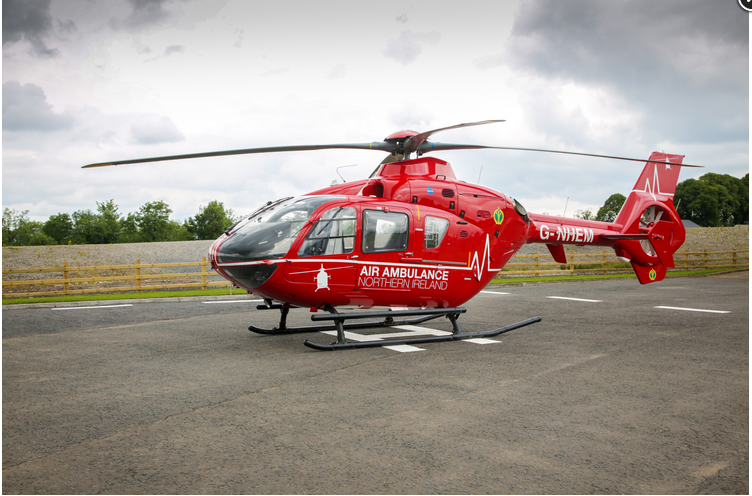 Our Story: why we want to support this amazing charity

At 2.00pm on Friday 14th September 2018, we received a phone call from my mother-in-law. She told me that Tony, my wife’s dad, had experienced a fall on the farm and was on his way to the Royal Victoria Hospital in Belfast by Air Ambulance NI. She asked if we could head to the hospital to meet him and make sure that he was OK. Reassuring us (and keeping us safe on our journey), she told us that all was OK and they were just checking him to make sure there was no internal bleeding.

The accident happened in a remote rural location a long way from the care Tony needed. For the normal ambulance service, there was no way to get Tony to the required care on time.  Northern Ireland is a rural community and does not have the motorway network of other countries so road journeys can be testing.

The air ambulance arrived. They surveyed the situation, learned more about the accident and about Tony. They learned about his fitness levels for a man over 80 years old, about his love of playing cards and going to football matches. They said ‘lets give him a fighting chance’ and transported him quickly to the care he needed.

At the time of the accident, Tony was indeed a fit man. At 80 years old, he would give me some dilemmas when we were down visiting. I would be playing camogie or football with our daughters in the fields and Tony would join us, shouldering me hard, nipping in front of me for the ball and trying the odd Cruyff Turn! I didn’t whether to step back or tackle him! He played cards three times a week and was a formidable force with a sharp brain and keeping track of the cards all night, frequently coming home with the prize.

Tony is one of life’s true gentlemen. Our daughters have always loved going to visit Tony and Bessie, and now is no different.

Tony has made a remarkable recovery. He looks forward to visits and loves to see people. I enjoy our discussions on the various football, hurling and camogie matches and other chats about various people, events and happenings in work and life down the years. Tony enjoys getting out and about – mainly to socialise and chat with people. He was always a very social person.

Air Ambulance NI saved his life. Their actions on the day and the simple fact that the service is available made all the difference. They were able to get him to the care he needed very quickly. Even though the doctors in the hospital did not offer us any hope, Tony did more than survive. He made a remarkable recovery that would never have happened if the Air Ambulance did not exist.

We were not expecting that call on Friday 14th September 2018. But it happened and the Air Ambulance crew were there for us. We want Air Ambulance NI to be there for whoever needs it in the future.  That means that we must do our part – we are doing two things to raise funds for this: